Reclaiming the title of a bold, audacious, big-thinking chapter.

The San Diego chapter of AIGA, the professional organization for design, has been a dynamic contributor to the local creative community since 1987. However, over the last few years, AIGA San Diego lost its way. Membership is lower than ever, and programming has been short of meaning and impact. There is a concerning lack of diversity and cross-border collaboration in this border city, and the chapter is often seen as an inapproachable designer’s elitist club. Inaction, membership rate changes, and lack of leadership from the national headquarter, on top of a global pandemic, did not help advance the organization.

However, opportunity awaits. In 2022, newly out of the pandemic, AIGA San Diego assembled an entirely new board with strong and determined leaders. Regionally, San Diego has just been awarded the World Design Capital 2024 with its sister town, Tijuana. What better time to shape and shine? This is the year to regain followership and leadership, become the hub to connect all things design and reclaim the title of the bold, audacious, big-thinking chapter.

Before we started to think of tactics, membership drives, and community events, we assembled a strategy team, met every week with key stakeholders, and entered an intensive discovery phase. Here we created alignment and authenticity to regain clarity around the AIGA San Diego chapter and reminded everybody involved (primarily at a volunteer level) of the big WHY behind all their efforts.

We discovered that in the wake of the World Design Capital in 2024, AIGA San Diego has its work cut out and needs to step up as a leading organization to showcase its talent and ingenuity in San Diego. Initiatives need to be meaningful and have an impact. As a chapter, they need to take the lead on being audacious, coming up with BIG ideas, and empowering their members to be part of something big.

They also need to embrace their proximity to Tijuana and its creative community and look closely at the make-up of their membership. Diversity and inclusion have always been at the forefront of the chapter’s values, but their membership and event attendees do not reflect that. There is a need to create a more accessible, accepting, and approachable organization.

After our brand foundation intensive and updated branding, AIGA San Diego is on the right track again to create a more welcoming, meaningful, and bi-national chapter.

One of the most significant changes was a chapter name change to include its sister city south of the border, Tijuana. The local community voted to officially change the name to AIGA San Diego Tijuana to fortify the cross-cultural relationship amongst design professionals throughout San Diego, Tijuana, and the greater Baja region over the last three decades.

The AIGA board members gained a sense of order, focus, and direction and can plan future events, initiatives, and membership drives accordingly. In addition, a detailed brand guide ensures easy brand execution and consistency even when board members turn over.
There has been increased attendance at community events, engagement at initiatives, and overall excitement and anticipation among members.

With this newfound confidence, clarity, and solid brand foundation, AIGA San Diego Tijuana regained its voice as a change-maker in the art and design landscape. The organization is ready to take on a big role heading toward Design Capital in 2024. 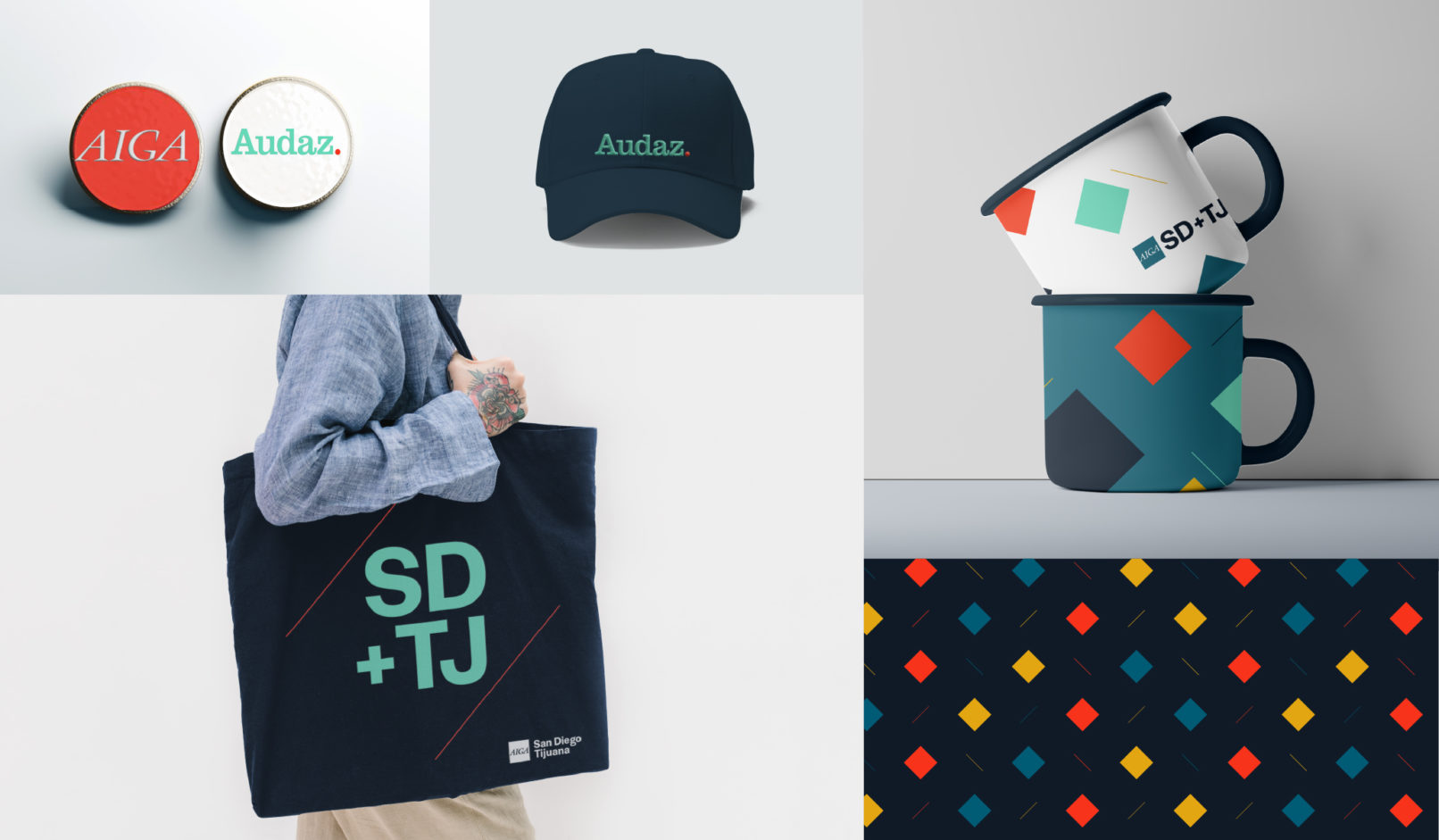 Back to the big WHY.

Multiple discovery sessions with critical stakeholders included:
Revealing the essentials (what, how, and most importantly, WHY), running a SWOT analysis (uncovering the chapter’s strengths, weaknesses, opportunities, and threats), and analyzing their wide-cast audience. We spent hours shaping and word-smithing the brand foundation (Mission, Vision, Values, Taglines, and Positioning Statement) and assigning personality traits to the organization to make it come across as personable and approachable as possible. All findings and outcomes are captured in a “Clarity Report” document. 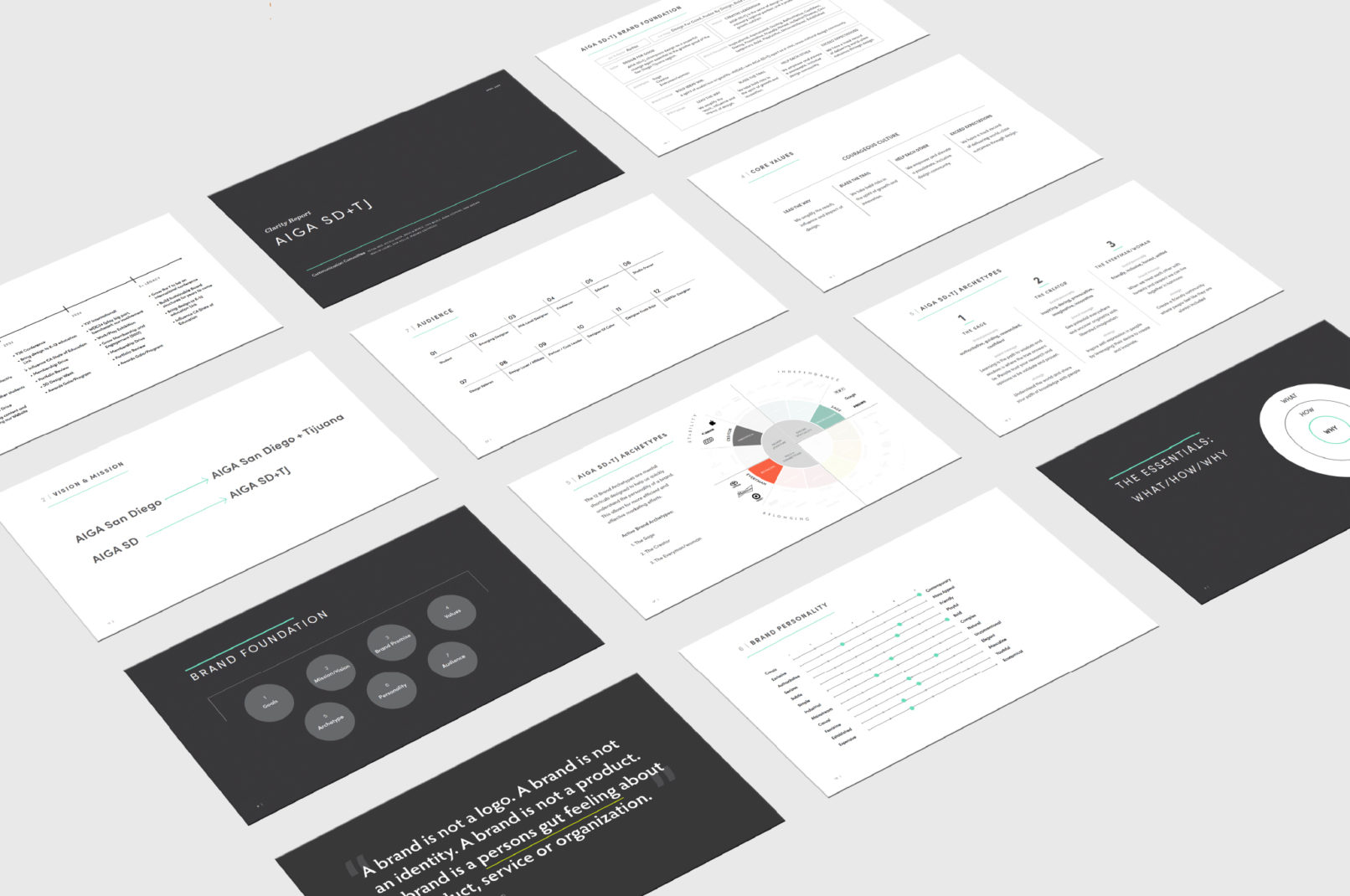 Reimagine the Chapter with an Updated Look.

With a clear vision at the forefront and a solid chapter brand foundation, a strong brand system must follow. A system that is flexible and easy to execute by whoever volunteers will be on the board. A system that is versatile yet cohesive to be usable across many platforms and applications. A timeless yet novel system for years to come without getting stale.

Can We Bring a Square to Roll?

The Brand Identity System from AIGA National provides guidelines and unity for and amongst the chapters. But the San Diego Tijuana chapter craved more meaning and representation of what makes it unique. So we added a layer of conceptional thinking to the updated brand that honors the chapter’s past, represents purpose and promise, and connects with its people. We decided not to touch the iconic square designed by Paul Rand in 1963. But here, in San Diego and Tijuana, they do things differently and have the track record to show it. They set things in motion to move toward change. Turning the square on its tip represents this divergence and force.

The single line is the most integral and fundamental part of the brand system, directly derived from the 45° turned square. It stands for leadership and imagination, action and setting things in motion. 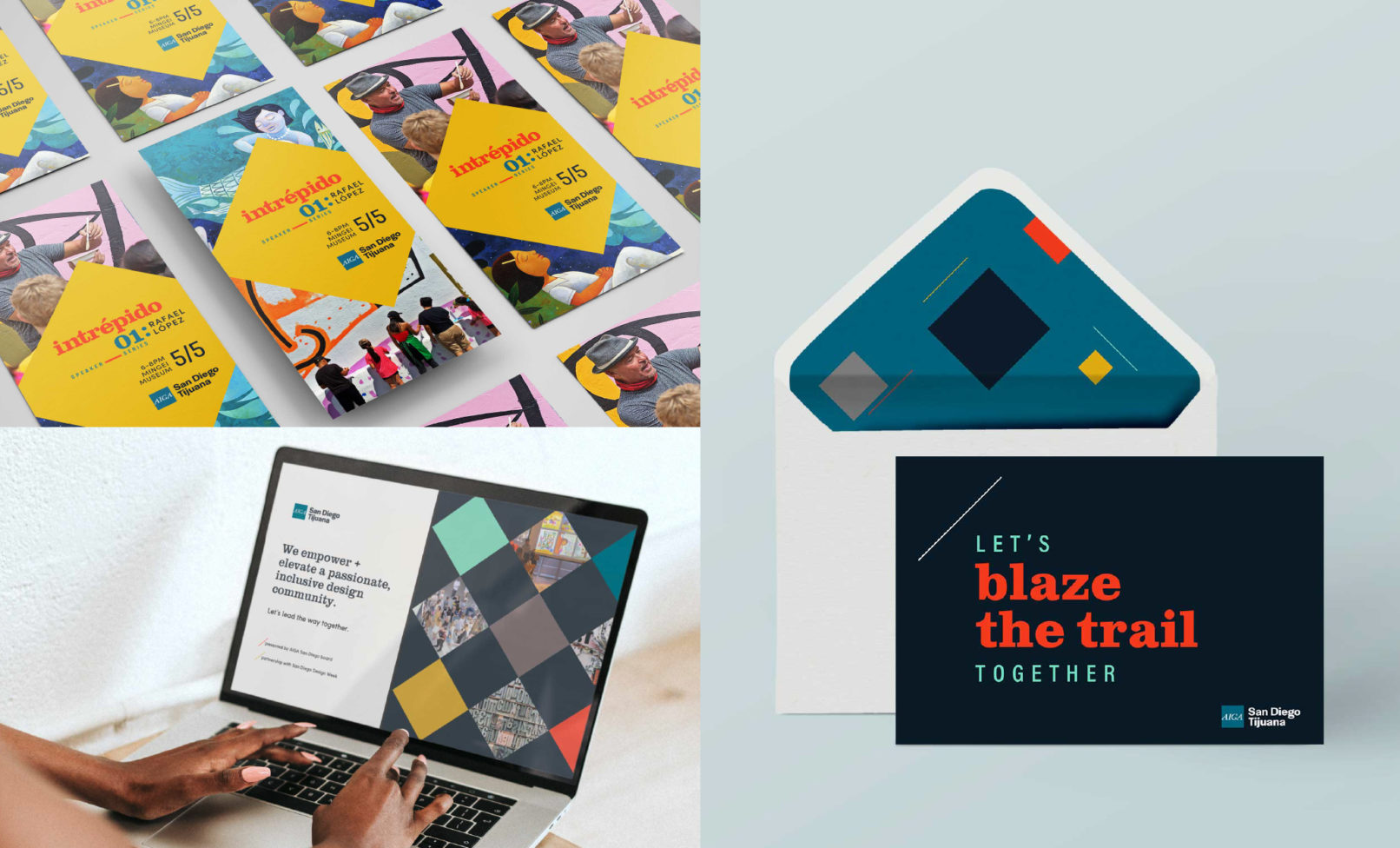 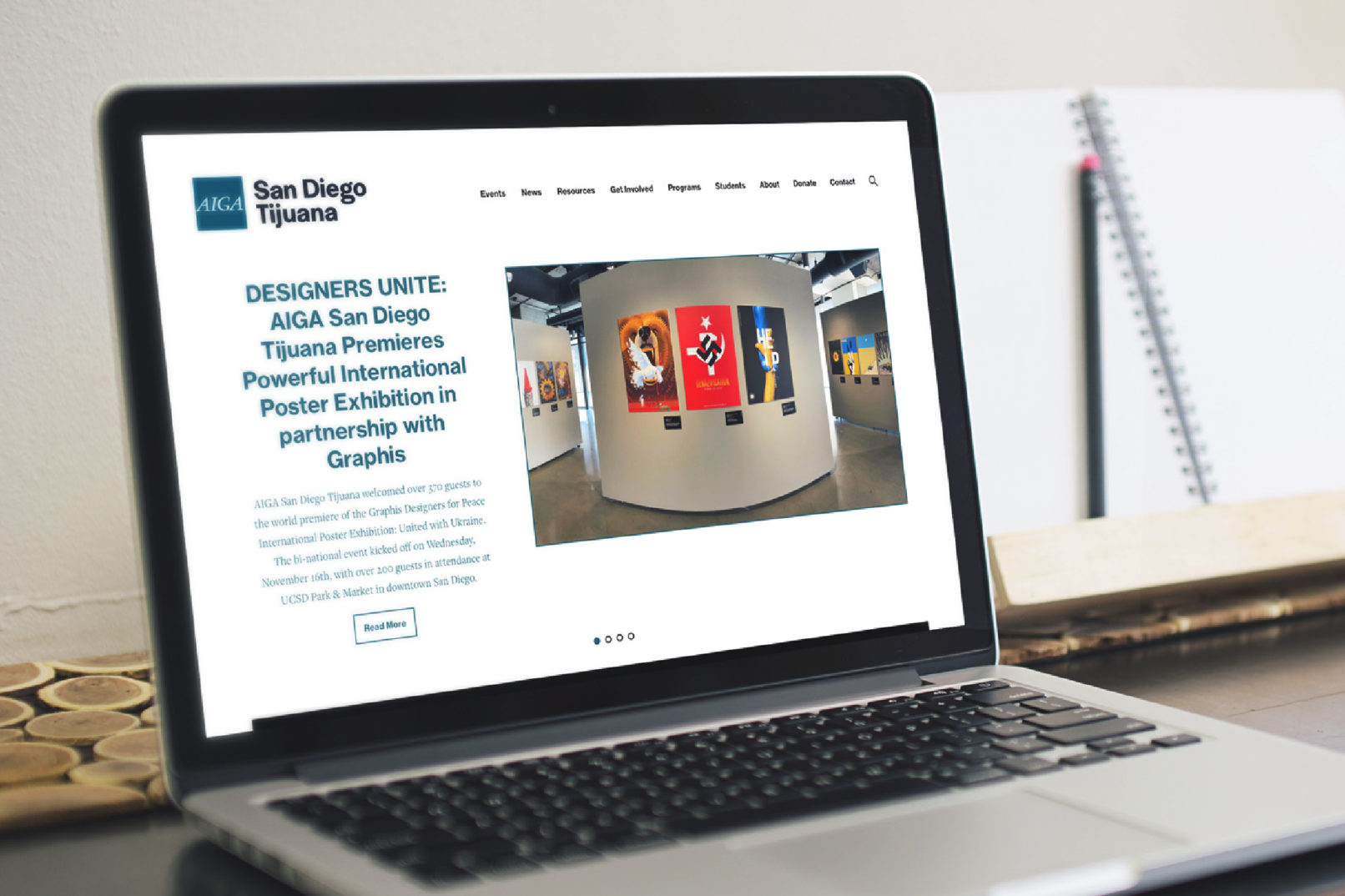 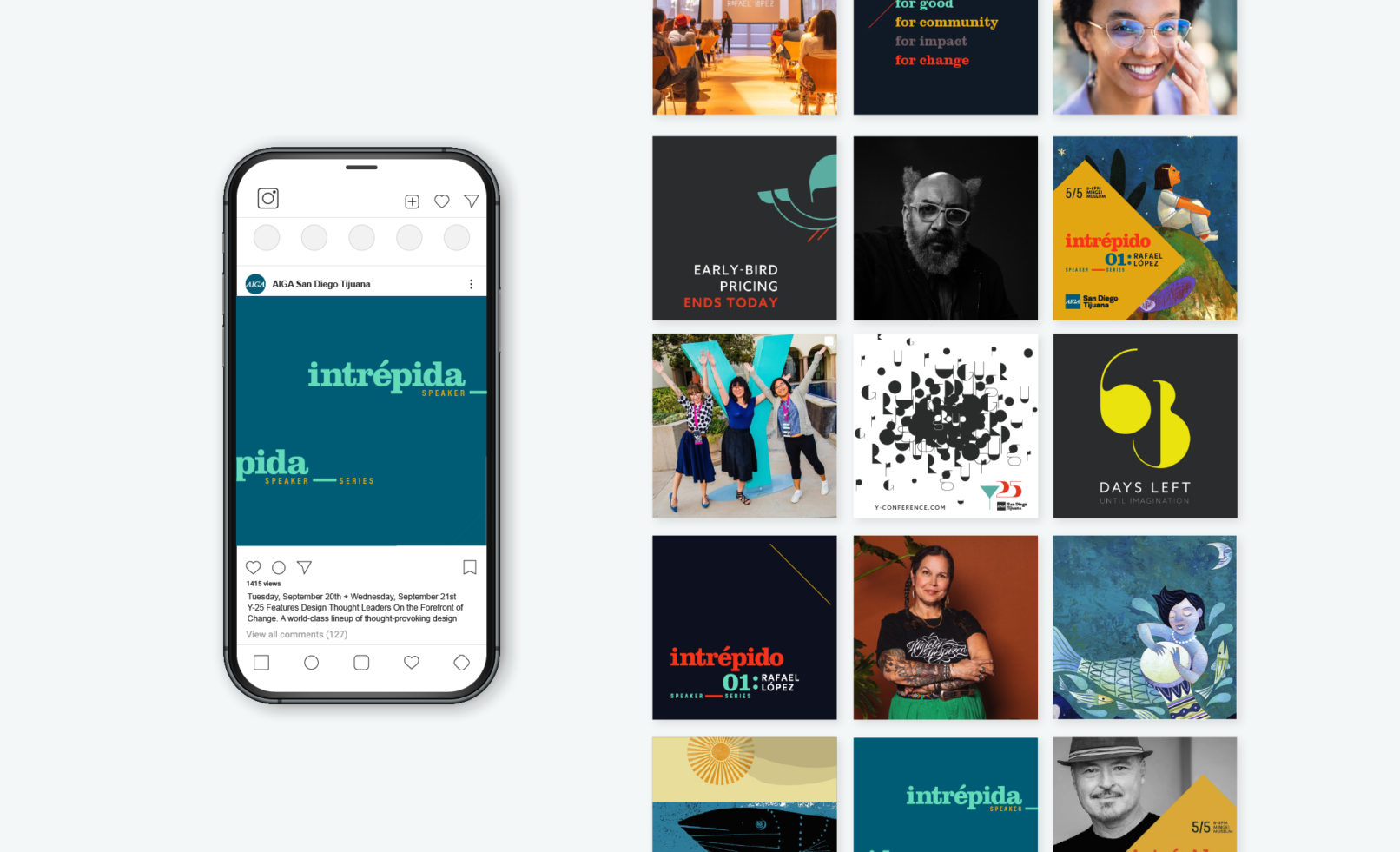 We captured and explained the reimagined brand in a detailed brand guide that is easy to understand and execute for each new incoming communications board member. Our intent with this guide is not to restrict creativity and innovation: far from it. Instead, we strive for a coordinated, consistent, and compelling brand presence at every touchpoint. This guide empowers the creative with many examples and brand elements to make the brand flourish and grow while maintaining brand consistency every time. 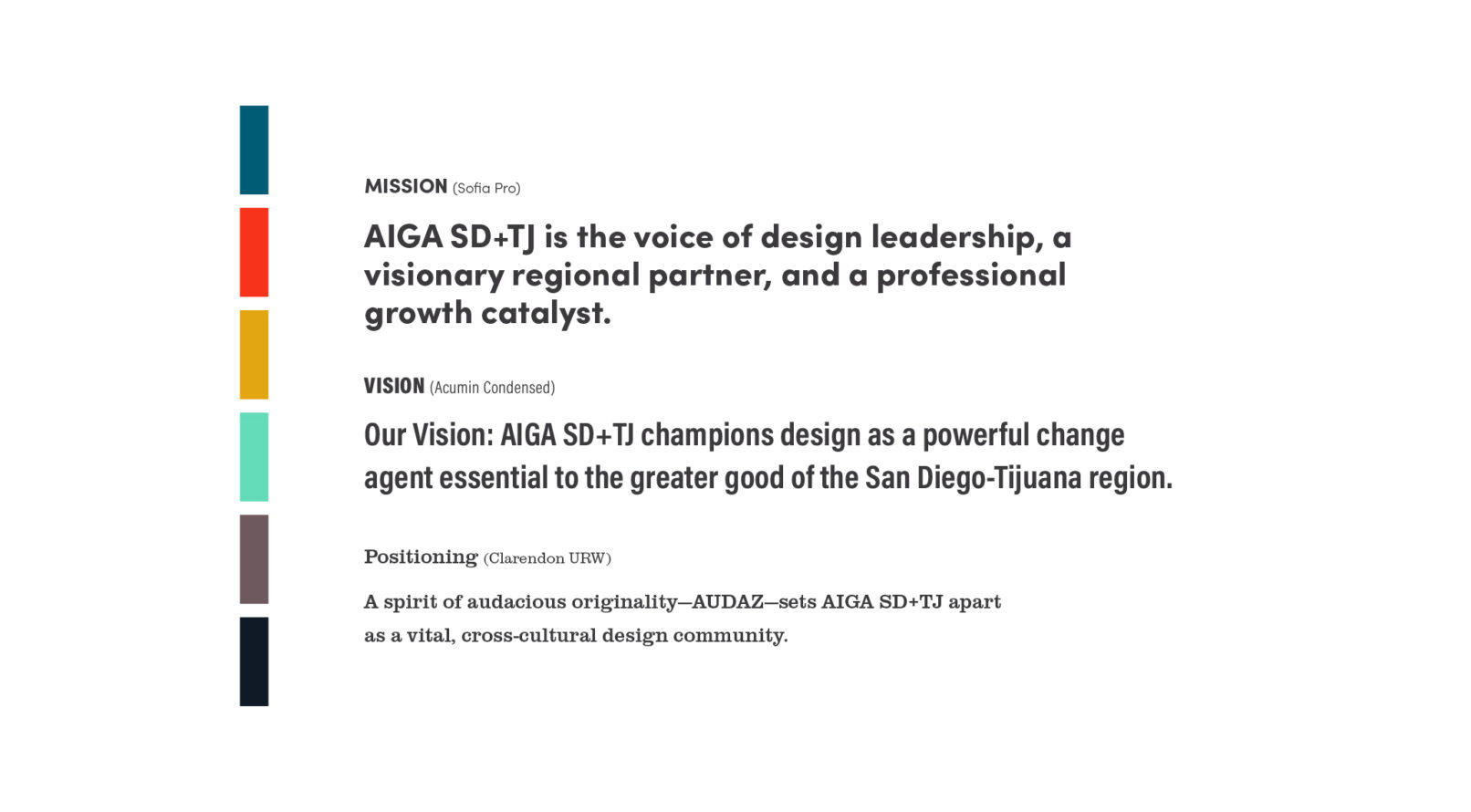 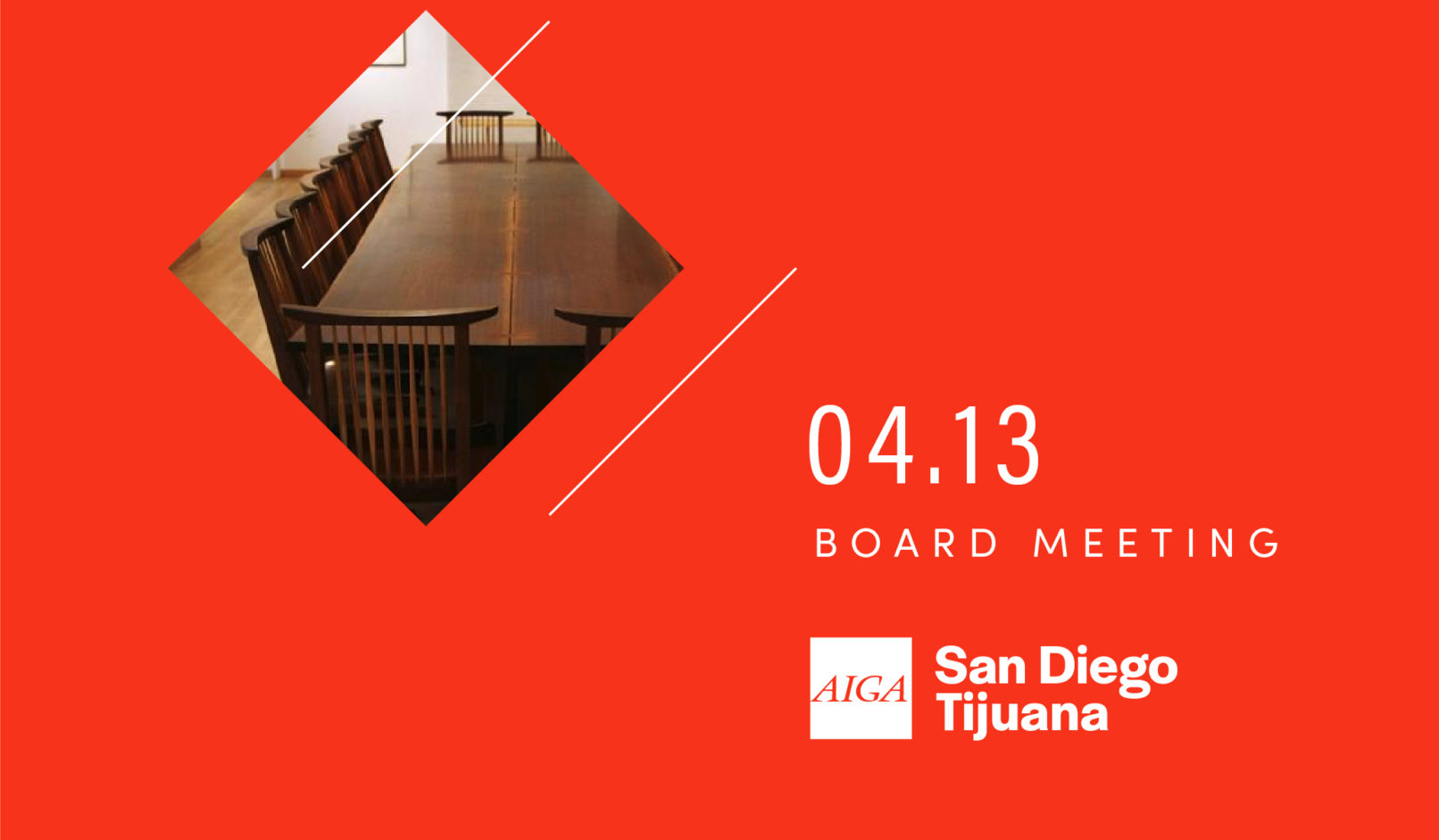 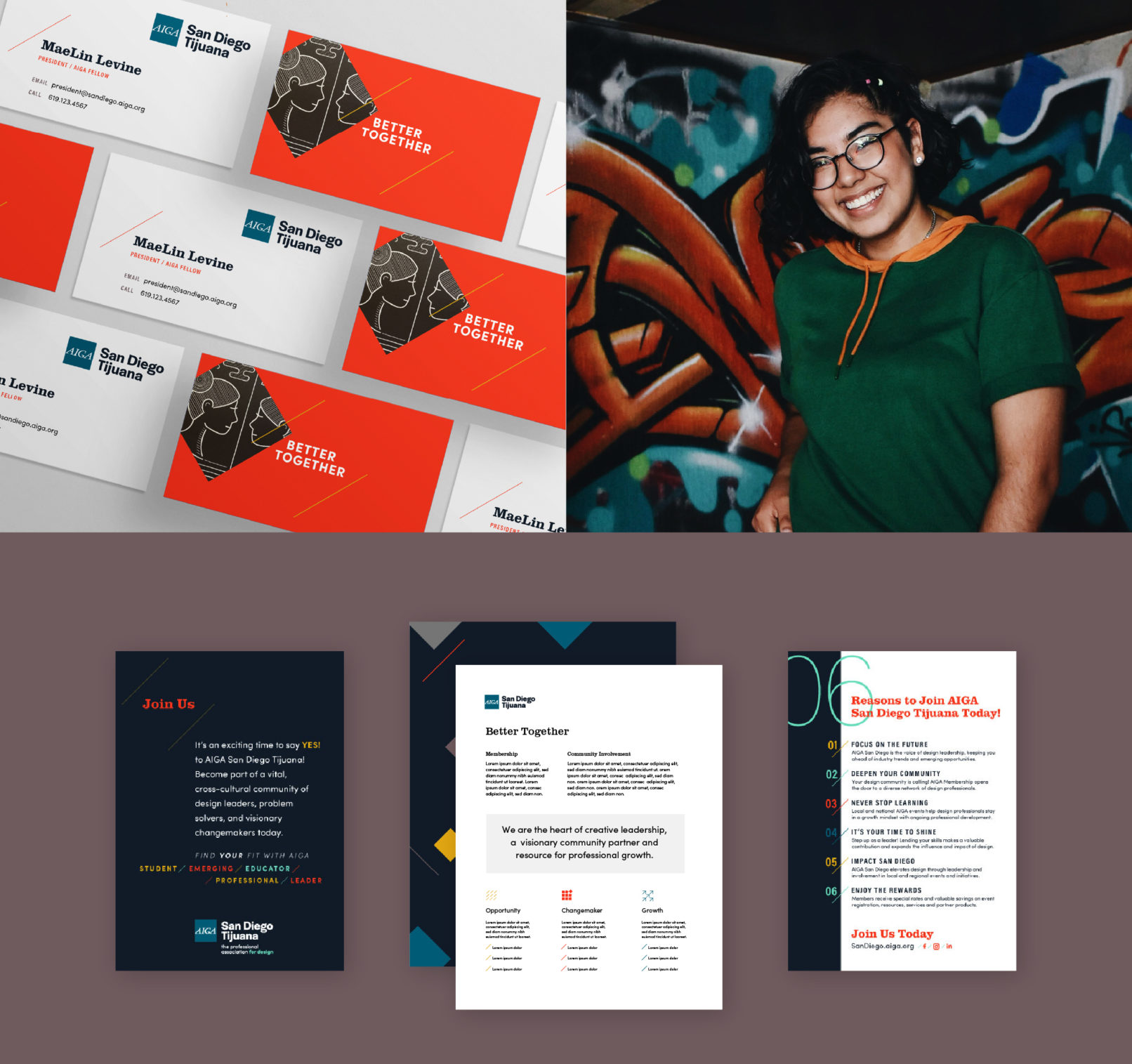 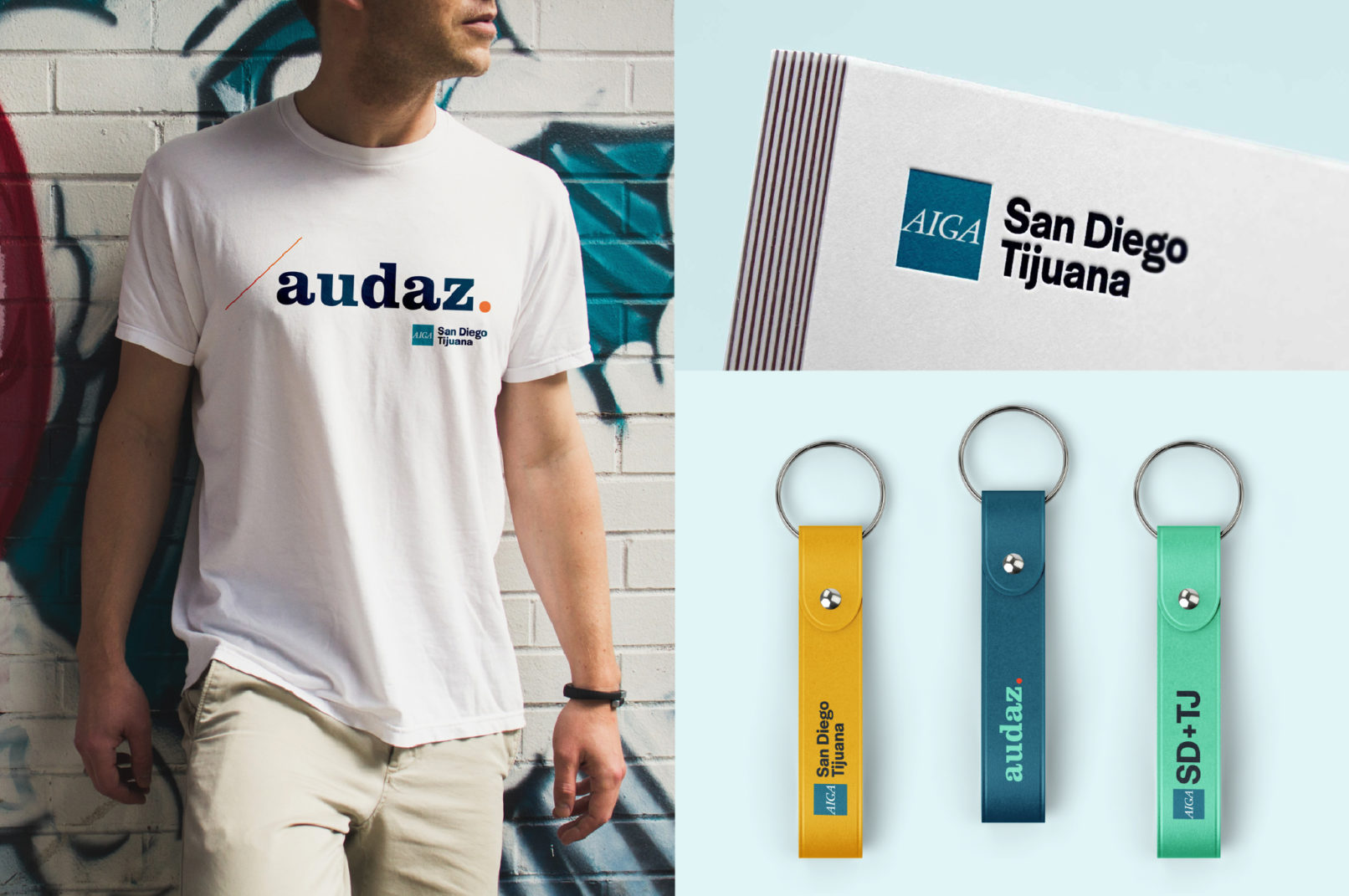 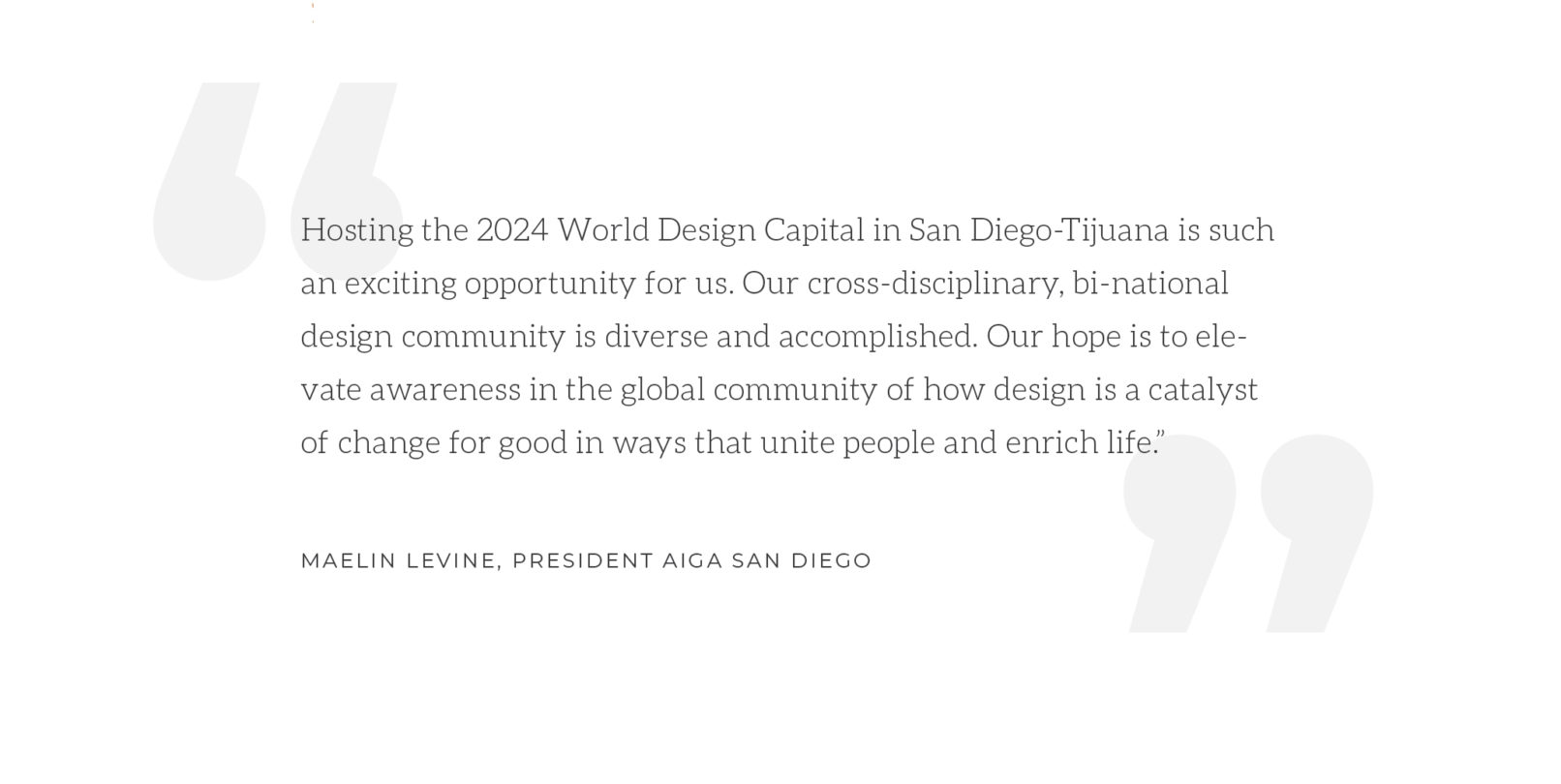 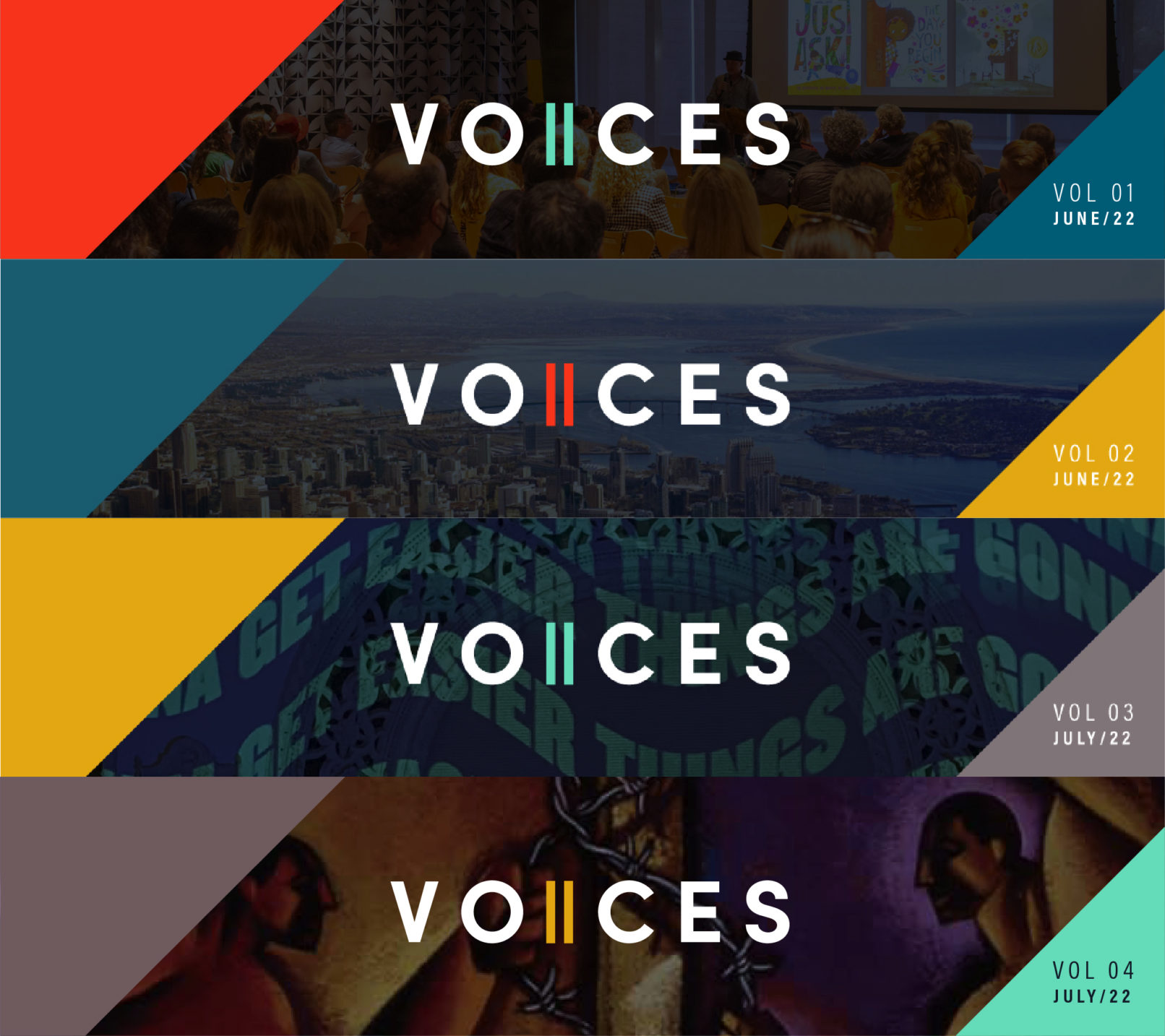